I’m back! I apologize for the lateness in posting, but it has been quite hectic here in Phoenix, AZ (not to mention a little warm…) With kids getting out of school, and my day job offering overtime, I have not been able to sit down for two seconds and write. It feels good to be back! The funny thing is, I am sharing a story from a good friend on his favorite pet…who is a big, goofy, lovable, opinionated, and fuzzy Maine Coon named Atticus.

It may have taken a while, but Atticus is now in his furever home with his good buddy, James… Enjoy the story. It will warm your heart. 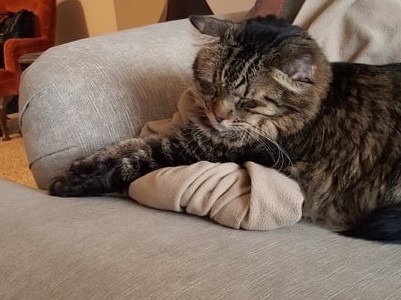 The phone vibrated next to me.

Hey. Are you ready?

Is this really happening?

Yes. You’re going to go over to her place right now.

I sigh as I pocket my cell phone and get up from my couch. A minute later, I’m outside wearing a hoodie and flip-flops walking across the parking lot of my apartment complex. It was December in Arizona, and it was a chilly 40 degrees. Blinking incandescent lights lit the chilly night. A car door slams as I cross the lot and head towards my destination.

This story begins roughly eight months ago with my best friend Gabriela. Gabriela lives in a small house with three dogs. For a time, she decided to rent out one of her rooms for a young woman to help pay her mortgage for a time. This young woman had a rather friendly cat who was able to tolerate the attention from three very unique dogs.

I was introduced to the pair a week after they moved in with Gabriela and learned that the young woman was Kate and the cat was Atticus. Kate was in her early- to mid-twenties and had the air of a youth who was still trying to figure things out. Atticus was a large Maine Coon-ish type of cat who freely came up to say hello. At this moment in time, Kate seemed to be heading in the right direction. She had a steady job with a good pay and was on her way to being able to support herself.

The dark brown apartment door stood in front of me. Next to me was a young man who seemed friendly enough, yet his eyes flashed a challenge as I awaited a response to my knock. Kate answered the door and took us both in. It was clear that she expected one of us. She looked harried and nervous, a far cry to when I first met her.

She beckoned us both inside and I saw Atticus look up at us with his curious big green eyes. There was nervous twitch in his tail as he walked around the small apartment. His carrier sat in the middle of the living area.

“Okay. Let’s get this done quickly,” Kate announced as she closed the door. She walked over to Atticus who quickly disappeared under the couch.

Three months had passed from my introduction with Kate and Atticus. Kate had moved in with a boyfriend and had taken Atticus with her. Gabriela was both grateful of the experience with a roommate and thankful to be alone again in her home with her three dogs.

I received a phone call one weekend afternoon from Gabriela. She was in a frantic mood and rushed through a flurry of events that I asked to be repeated. Kate was moving back in. She had broken up with her boyfriend after he abused her.

The young man, who was introduced as James, helped Kate lift the couch causing Atticus to dart out and seek refuge in the bedroom.

Kate ran after him, all pretense of calm evaporating from her as she did. I stood there taking everything in with my hands in the pockets of my hoodie. It was still a little surreal to me that I was in this apartment about to be given a cat.

Kate reappeared with Atticus in her arms. A look of panic gleamed in his eyes as she stuffed him in the carrier, which now appeared to be a size too small for him.

“Okay,” she said once the deed was done. “I have his food in a plastic container. He likes fish flavoring. I also have a can of pumpkin sauce and his litter box as well. Finally, he likes to watch the water move as he drinks it, so I have this drinking fountain. I’m not sure if it works though.”

Her words are spilling out of her mouth. I’ve gone to crouching by the too small carrier to comfort Atticus. He had begun to meow in protest.

“He’ll be fine,” I finally say looking up at Kate. I try to sound as calm as possible. Kate’s eyes and posture relax. “I’ll make two trips. I’ll get him over first and then come back for the rest.”

Gabriela was frantic at work. Atticus had just learned how to operate the doggie door.

Four months had passed since Kate had moved back in. She was no longer with Gabriela at this point in time. She had decided to stay for only a month before she had set out to find a place on her own. In the meantime, Atticus had remained with Gabriela.

I was sitting with Gabriela in the break room listening as she detailed her attempts to get Kate to pick up Atticus.

“If, and this is a big if,” Gabriela began. She looked me directly in the eyes. “If I can’t get Kate to pick up her cat. You’re the only person I can trust that would be able to be a good home for him.”

We had talked often about me getting a pet of some sort. I had taken care of Gabriela’s dogs for four months a year ago due to an emergency. I preferred cats.

“I guess that can work…”

Atticus’ meows had slowed as I carried him across the parking lot to my apartment. I had tried to calm him with “It’s going to okay” and “You’ll be fine.” Maybe just hearing soothing words helped – I wasn’t sure.

“Here we are,” I announced as we entered my apartment.

I carefully placed the all too small carrier on the floor in the middle of the living area and unzipped the top. Atticus timidly peered out and took a quick scan of his new environment before leaping out and exploring.

I left the apartment and headed across the lot to Kate’s pad. 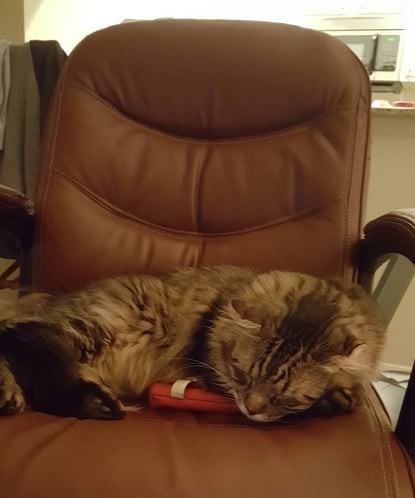 Okay, this might be happening. I finally contacted Kate and she was mulling it over.

I sat at my desk at the office looking down at the new text. It had been less than a week since Gabriela and I even talked about my adopting a cat, let alone adopt Atticus.

Where does she live? I texted back.

The response had come back lightning quick. Believe it or not, but she lives in the same apartment complex as you.

You’ve got to be kidding me.

The second trip to Kate’s had been a quick one. She waited around as I collected Atticus’ litter box and food. She barely acknowledged what was happening. We stared at each other right before I left.

I wasn’t prepared for a speech, so I said the cheesiest lines I could think of. “He’ll be fine. I’ll take good care of him. And, you’re free to come visit any time. I’m right across the way.”

She nodded and seemed to be on the edge of tears. We both said good night and I made my way back to my apartment.

Atticus stuck his head from around the bedroom door before disappearing. I placed the food and litter box in their respective places and called out to Atticus. There was no response and I headed into the bedroom. Atticus was nowhere to be found. Knowing cats as I do, I got down to the ground and found a pair of green eyes staring at me from under the bed.

It’s been seven months since I adopted Atticus and we’ve bonded better than expected. We both have a laid back attitude and we both love to take naps during the day. He has claimed my computer chair as his own and frequently demands I vacate it to allow him a chance to curl up and sleep.

He keeps me going throughout the day and I’m sure to post more about him in the future.

Thank you for reading.

I love this story. You can see what Atticus has been through; the uncertainty ad the instability. On the other side,  you can see from the perspective of James, that Atticus was not going to be “rehomed” again. His home environment provided the stability and safety that Atticus needed and desired. I love that James was open to bring an unknown cat into his home, no questions asked.  Atticus needed help, and James was there. There is stability and love…with no judgment.

Many times, these kinds of stories can end with a heartbreaking conclusion; however, Atticus found his human. He didn’t end up in a shelter or in someone else’s home where he would be neglected. He found someone who would love him; all of him, despite his history.

And as you can see…Atticus is quite content in his new furever home.

Tell me what you think. Did you enjoy reading Atticus’ story? Do you have a similar story you would like to share? Let me know in the comments below.