Have you had a pet (or pets) that have been extraordinary? Were they more like spirit animals or soul mates? As I start this new blog, I thought I would share some of my favorite pet memories, and how these furbabies shaped my life. Many pets have come through my life; however, I want to focus on a few that really shaped my life and als0 helped me learn how to cope with loss. 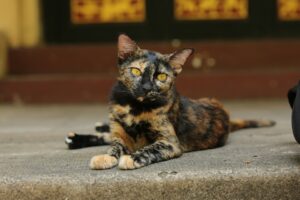 Patches was a tortoiseshell calico who made up for being the runt of the litter. She was a pudgy cat with a small head and quite an attitude. She was quirky, drooled any time you pet her, and she loved breath mints. My parents and I adopted her and her sister, Midnight from a neighbor’s house. They were two cute little kittens who stole everyone’s hearts, but also taught me a few things about how to care for cats.

I was super excited to have my own cat (Finally!), and I made sure Patches was fed every day, had plenty of water, and had a clean litterbox. This was my first time being responsible for a pet, so I was taking it seriously!

Some of Patches quirks were endearing; at the same time, some were a little more frustrating. For example, if I left home overnight, Patches would leave me a “present” to find when I arrived home. I never thought a cat would seek revenge, but Patches proved me wrong.

oUR NEW LIFE TOGETHER

When I moved out of the house at 19, Patches was by my side…she wasn’t pleased to move, but she acclimated after a little time. As time moved on, and I got married to my high school sweetheart, her revenge became a daily occurrence. Unfortunately, nothing I did to appease her worked. Since my new husband and I lived in an apartment, I felt Patches would be happier at my parent’s house.

My parents cared for Patches and Midnight until they were old and ill. My mom was responsible for bringing her and Midnight to the vet when they were ready to cross the rainbow bridge. I regret not being there for Patches; holding her paw and loving her while she slipped away.  More importantly, I regret putting that responsibility on my mom’s shoulders.

When I look back on my time with Patches, I realize there was so much I didn’t know about cat behavior. For example, declawing a cat is a horrific surgery. I didn’t know that cat body language can speak volumes and that multiple cats in a household need multiple access points to a litter box.

There were so many things to learn, and I thank Patches for the beginning of that journey. 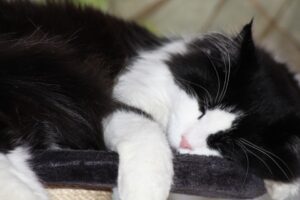 One of the reasons for Patches moving back to my parent’s house was that my husband and I adopted an amazingly beautiful and young Maine Coon named Harley. Harley was a super chill cat who would get along with everyone, and who loved to be close to his people. He was the only cat I could hang upside down or wrap around my neck. The only problem was that Patches did not like him, and he nonchalantly made sure that she became the pariah in that relationship.

After Patches left, Harley didn’t stay alone very long. We ended up adopting a 4 week old female DMH, who we named Aprilia. Their introduction would make most Behaviorists cringe. My husband and I brought Aprilia home and then promptly placed her in front of Harley, and told Harley he now had a little sister. (We call this a baptism, yikes!) To our amazement, Harley sniffed Aprilia and started grooming her.

My husband and I lived in Washington at this time, and fleas were a problem in the area. The vet recommended we give both Harley and Aprilia a bath to get rid of the fleas. I purchased a good flea shampoo, drew a bath, and was able to bathe Aprilia with no problem.

When I put Harley in the tub to try and clean him off, he let out a low gutteral sound, and stopped breathing. I scooped him up, yelled for my husband, rushed Harley into my room and tried to give him CPR. His body was rigid, his body expelled feces, and I could not get him to breathe. I called the vet, and they told us to come in immediately.

We rushed him to the office and it felt like time stood still.

The vet gave Harley an injection that was supposed to jumpstart his heart, but it didn’t work. Harley had actually passed away in my arms at home. I was devastated. Did I do something wrong when I tried to bathe him? Did I press on his back too hard, or did he inhale deadly fumes?

I then began asking questions about Aprilia. What will happen to her? Is she going to die too? There were so many unanswered questions, but at that time test results seemed to take forever to come in.

The vet performed an autopsy and determined Harley’s heart suddenly stopped. This incidence was similar to when an athlete collapses on the court or the field. There is no telling why or how it happened; it just does. Harley had only been a part of our family for a year…at most.

wHAT COULD i HAVE DONE? wHAT’S NEXT?

I continued to beat myself up as I thought I caused his death. Should I have really given him a bath? Did I get the wrong shampoo? Or…could it have been something like heartworms? I still don’t understand his death to this day…and it was about 20 years ago.

Looking back on his death, I realize, Harley is the one who led me into working in the animal welfare sector. He is the one who taught me to continue loving my pets as well as those in the shelters; but  to also learn how animal behavior works, and to see that each animal is treated with love and dignity – in life and in death. 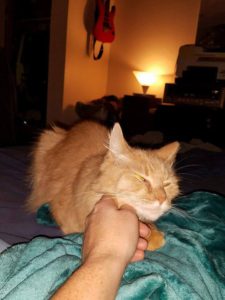 Aprilia is one of my most recent pet memories, and it is still raw. After Harley’s death, I annoyed Aprilia with how close I monitored her health. Any sniffle, weird looking nodule, or awkward meow, I rushed her to the vet.

Once the wounds started to heal, I got to know Aprilia for who she really was. Aprilia was a goofy little girl, who loved to drink from the faucet and groom my husband’s beard. She would climb up tapestries and Christmas trees, and zoom around the apartment. Snuggling was off limits, but she would lay close to us and let her motor roar while we fell asleep. Aprilia was an amazing little cat.

My husband and I moved to Phoenix, Arizona in 2003, and the journey from Washing to Arizona was an interesting one. Aprilia took it like a trooper. We moved into my husband’s uncle’s casita and then to 1 bedroom apartment. In this time, my baby had been exposed to my in-law’s house (and their dog), multiple hotel rooms, and other small spaces.

When I began volunteering at a rescue, she was introduced to many different friends. Her first friend was Abel, a 17 pound DSH, who made me a failed foster parent. Soon after that, she was subjected to three tiny kittens, Mozart, Brahms, and Francesca. Once the kittens were adopted, I fell in love with an Alaskan Malamute named Roc. So many changes for my little girl to work through, but she handled it like a champ!

A life lived to the fullest

Aprilia lived to be 18 (passing away in 2019). Her entire life was filled with constant change; be it through the lives and deaths of a few favorite friends, the births of my three boys, and moving to yet another house. Aprilia was a trooper, and she allowed me to learn how cats interact with other pets as well as humans; the nuances in body language and that even though I may have failed her in some ways, she still forgave me, and loved me…unconditionally.

Her last days were hard. A cat who is fastidious with grooming and litterbox became incontinent and unkempt. She stopped eating and couldn’t get up. I couldn’t stand to see her in such distress, so I had her humanely euthanized with myself and my sons surrounding her and giving her love.

I sit here crying now because I love her. She was my companion my entire adult life, and she experienced everything with me. I miss her to this day, and pray that I didn’t wait to long too let her go. 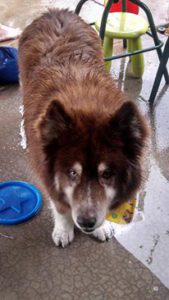 THE BESTEST OF THE BEST

This story is the hardest for me. Roc, an Alaskan Malamute came into a limited intake shelter with his brother Koda.  I was working there that day, and we almost didn’t take either of them in due to the breed’s stoic demeanor. As it turns out, Roc and his brother probably did a little better in the shelter than most dogs because of the stoicism.

Weeks went by and nobody wanted to adopt either of these amazing northern breeds. (Who blames them? We were in the desert and Mals belong in the snow.) After a couple months, his brother Koda was adopted which I found odd because Koda had Valley Fever. Roc was completely healthy.

As time went on, Roc became my favorite dog in the shelter. Anytime I taught classes or was working in the behavior department, I brought him out. I didn’t want to take him home because Malamutes can have a strong prey drive, and I didn’t want anything to happen to Aprilia. Interestingly, I found out the cattery was actually using him to dog test the cats! I immediately told my husband, and we decided to foster him.

We failed at fostering once again! Within a week, Roc was a member of the family. This six year old Malamute, befriended our cats, Aprilia and Abel, was house-trained, and loved his family.

Roc was my  rock (pun intended) when I miscarried my first pregnancy. He was by my side during an incredibly devastating time; but more importantly, he helped my husband learn how to care for me.

When I brought my firstborn son home, Roc did not leave my son’s side. My son wasn’t my baby…he was Roc’s baby. He was the same with my other two boys. I have pictures to this day where he was either guarding the bathroom door during bath time or letting the boys hug on him.

Even as I went through a heavy postpartum depression, Roc was always there to reassure me that things were going to be ok.

My Roc-Roc lived to be almost 17. I feel that even though I failed him on so many levels, he loved me unconditionally. He forgave me for the hard times we went through and just wanted to make sure that our family would remain in tact after he was gone.

Roc taught me so much in the 10 years he was with us. He never left my side. He cared for the cats as well as his humans.

There was so much love given that my heart overflows even thinking about him. In his last moments, he was surrounded by his favorite human, my oldest son (6 at the time), my husband, and myself.

To this day, I thank him for getting me through the toughest times in my life, but also look forward to meeting him on the other side.

These are just a few stories of the pet memories that have changed my life.  Each pet provided unique learning experiences as well as amazing memories to reflect on. As time passes, I know there will be many more pet memories and losses; however, the journey with each pet is worth the time. It is better to have loved and lost than not loved at all…right?

3 thoughts on “My Favorite Pet Memories”