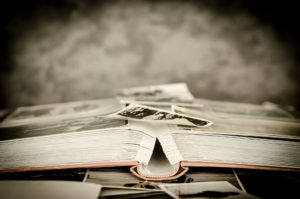 Now that we have talked about the Rainbow Bridge and how to prepare for a pet’s death, I felt starting a mini-series of favorite pet memories would be fun. This will help to lighten the conversation, but also help focus on good times we have with our pets. I am not going to be the only contributor on these stories (cuz that would be boring!), I am also going to have some of my favorite people sharing their insights and stories for the blog.

For those who have just started reading my blog, Harley and Aprilia were my two cats named after motorcycles. Harley was a big Maine Coon and Aprilia was a tiny buff colored DMH. My husband and I brought Aprilia home because we felt Harley needed a playmate…and in all honesty, I just wanted a kitten! I remember carrying teeny tiny, four weeks old Aprilia on my lap in the car and then carrying her into our third story apartment.

Side note: when introducing any animal into the household, you will want to take it slow. Keep your new pet in their own room for a little bit until they get comfortable in that area. You can add items your other pet uses into the room, so they can get use to the scent. Next, you can have the pets swap rooms and then eventually bring them together. The amount of time it takes is dependent on the personality of your pet.

Okay, back to the story. Harley met us in the hallway, and I placed Aprilia in front of him and said “Look, I brought you a friend!” I remember seeing Aprilia standing in front of Harley with her little kitten tail standing straight up. Harley sniffed her, and then immediately began grooming her. We got lucky! The two became inseparable.

Harley was a good teacher for Aprilia. He taught her to climb the tapestry we had hanging behind the couch. He taught her to sprawl out on the back of the couch, and to zip around the apartment. I remember waking up in the middle of the night one time to realize both cats were sitting on my chest staring at me, so Harley taught Aprilia how to be kinda creepy too!

These are some favorite memories I have of the two of them together. It was short-lived as Harley passed away a few months later, but I will always cherish them.

Ahh, Abel…My 17 pound male DSH with small paws and an even smaller meow. He was a rescue whom I introduced to Aprilia (again, a little too fast), but who fit in pretty well. He was a true scaredy cat, but I loved him to bits! My favorite pet memories with Abel were his love of sleeping on my legs at night, and his ability to make Aprilia mad, and how he taught our foster kittens how to behave.

Abel was a very large cat, and he loved to sleep on my legs. He was so big, that his body would fit down about three quarters of my legs. God forbid I move! He would get mad and then situate himself again to make sure he was sleeping on my legs. I got to the point I only slept on my back, so he could sleep too.

He was also very good at annoying Aprilia. Anytime Aprilia would move, Abel would be lurking close by. He would treat her like human siblings treat each other…”Mom, he’s touching me!” “No, I’m not”…you look at the fight and one sibling has a finger close to the other sibling’s face. This was Abel in a nutshell, always pushing boundaries.

When we took on three foster kittens, Abel was the one to roughhouse with them and to teach the kittens how to behave in the home. He would run around the house with them (poltergeist kitty run), put them in headlocks to remind them that he is the boss, but he would also groom them and snuggle. The kittens brought out more of his personality, and I was able to see how goofy he could be, but also how caring he was.

Roc was an amazing Alaskan Malamute. I have so many favorite memories of him, it is hard to choose which ones to talk about. I remember the day he came into the shelter as an owner surrender, how he became one of the dogs used in the cattery to dog-test cast, and how he became my favorite dog in the shelter.

Fast forward to approximately two years later. Roc is part of our family (failed foster 101), and we are now expecting a new human baby. We adopted Roc when he was six years old. He was already set in his ways, so we were not sure if he had been exposed/introduced to kids or how he would do with babies. I researched on how to prepare Roc for a new baby, so I would play baby sounds to see his reaction, let him sniff the blankets, show him baby clothes, etc. He seemed to be interested in the items in a positive way; however, the ultimate test would be when I brought my firstborn home from the hospital.

The day arrived when I was able to bring my 10 pound bundle of joy home to meet Roc. I was so nervous, but excited to see how my fur baby would react to my human baby. My husband and I walked through the door and saw how Roc was so excited to see us…He could sense we had a new baby, and was interested in finding out what this new squeaky, smelly thing was. 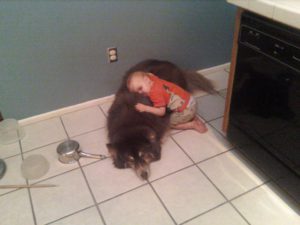 We lowered the baby down far enough where Roc could inspect him, and from that moment on, our firstborn became Roc’s baby. Roc would always watch out for my son. He would protect him from anybody he saw as a threat by basically putting himself in between the person and the baby. He would let my son climb on him when he got older, and make sure bath times went OK.

The relationship between a boy and his dog was so sweet. We were so fortunate that Roc was a gentle soul who loved his family unconditionally. He took care of all three boys and was so gentle with them. I don’t think he had a mean bone in his body. He was the perfect dog for our family!

I am glad I am able to share some of my favorite pet memories with you. In looking back, our pets have greatly enriched our lives, and I would not change history at all. As much as it hurts to lose these fur babies, there are so many good memories my family was able to experience, and I know we will see each other again.