I was sitting in church this morning and listening to a guest speaker talk on the subject of suffering. It’s definitely not an upbeat discussion; however, it made me think on how we work through suffering, and how we see our pets when their suffering is no more.

The most common theme when listening to pet families talk about the loss of their loved one is that their pet has crossed over the Rainbow Bridge. This brings such a vivid, beautiful picture to mind, that I was curious how we came up with this phrase, what it means, and why we use it.

The History of the Phrase

In an article that Washington Post published in 2018, the origin of the phrase is fuzzy, but it came to light somewhere in the 1980s. Rainbow Bridge was known as a poem written to help people through losing a pet. Three people claim to have coined the term and written the poem, but it is difficult to tell who deserves the recognition. Paul C. Dehm, a grief counselor in Oregon is said to have written the poem in 1981, and published it in 1998, but William N. Britton published a book in 1994, titled “Legend of Rainbow Bridge”. Wallace Sife, the head of The Association  for Pet Loss and Bereavement also lays claim to have coined the phrase and written “All Pets Go to Heaven” and his book, “The Loss of a Pet”. Yet another story states a couple who took care of gravely ill ferrets, wrote a poem for their friends, and the local veterinarian asked if they could use it in their sympathy cards.

Although we are unable to pinpoint the history of the phrase, we are able to see that since the 1980s, our pets have become more of a companion, and less of a pet. The poem helped us understand that losing a pet can bring such grief and sorrow, and also helped society to accept that a loss of a pet can be just as difficult as a loss of family member or friend.  Since the 1980s/1990s we have seen an uptick in pet bereavement gifts and cards as a result.

What Does it Mean?

The Rainbow Bridge is an overpass into a meadow between Heaven and Earth. The poem paints a beautiful meadow where our pet’s health is restored. They have no more pain, no more illness, and they can run free to play with the other pets who have crossed the Rainbow Bridge as well.  They are warm, well fed, and have plenty of water to sustain them. It is a place of great joy!

The poem goes on to say that when a pet’s owner passes away, they are alerted to this new journey, and look for their owner with intent. The pet runs to the bridge to greet their beloved owner where they are reunited, never to be separated again. There are many kisses and hugs, and the knowledge that even though a pet has been gone from Earth, they never left the owner’s heart.  As the poem ends, both owner and beloved pet walk together over the Rainbow Bridge into Heaven.

This is such a beautiful image as we know the loss of our pet brings so much sorrow, but the belief that we will be met in the meadow by our loved ones brings so much joy and comfort. It means even though we had to let them go physically, we never forgot them, and they’re always with us in our hearts.

Why We Use It

According to the Washington Post article, a study was done showing that people who lose their pets can grieve as much as those who lose a family member. The level of grief was dependent on how the pet was perceived. The study showed that approximately 30% of the people said their grief was prolonged for six months or more; 12% had major life disruption after the loss of a pet, and more than five percent suffered post-traumatic stress. This shows that pets have become so much more to us than before, and it makes sense they are more likely to be our companions, our best friends.

When I was younger, I thought the sentiment of a pet crossing over the rainbow bridge was kinda silly. Why would they do that? Wouldn’t they just go to Heaven? Why would they wait for us? Now, especially after losing a few family members, I can understand why we choose to say they have crossed that bridge.

Our pets are not only cute fuzzy beings that rely on us to care for them. They are cute and fuzzy creatures who take care of us and give us unconditional love, which is much more than we can give in return. These creatures who we say we’ve domesticated bring so much more into our lives, and I know I want to meet Roc, Aprilia, Harley, Patches, and Abel in the meadow when I die.  I want to hug them and kiss them, and let them know how much they have given to me and to thank them for the love and lessons taught…and then we can walk over that rainbow bridge to Heaven, where we will never be parted again. 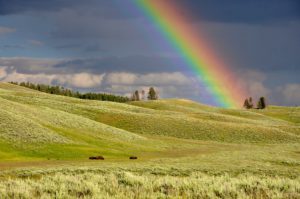 12 Replies to “Somewhere Over the Rainbow Bridge”